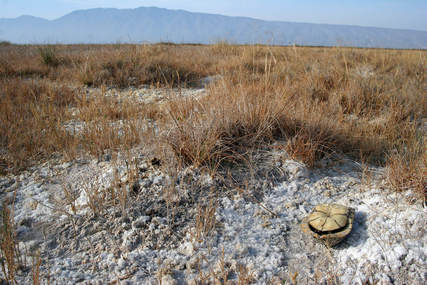 Terrapene coahuila in the Wetlands of Cuatro Cienegas, Coahuila, Mexico
Craig Stanford and Gamaliel Castaneda
​The Coahuila Box Turtle (Terrapene coahuila) is a species of global concern, listed as Endangered by the IUCN Red List, and as one of the 50 Most Threatened Turtles on Earth by the IUCN SSC Tortoise and Freshwater Turtle Specialist Group.  It is a species of special concern for the Turtle Conservation Fund as well. Terrapene coahuila is endemic to the wetlands of the Cuatro Cienegas Basin in Coahuila, Mexico.  Agricultural development in the area, with associated intensive irrigation, has resulted in a drop in the local water table, threatening the entire species' population.  There is currently no monitoring of the population; all conservation work, including turtle monitoring, was defunded and halted in 2015 by the Mexican government. We will initiate a conservation program for T. coahuila, starting with a new survey and census of the population.  We will also obtain data on the current status of two other endemic chelonians, Trachemys taylori and Apalone spinfera atra, in the course of the T. coahuila fieldwork. 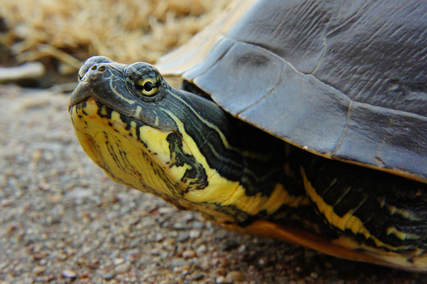 Western Chicken Turtle Metapopulations and Wetland Connectivity
Donald McKnight
Terrestrial habitat corridors are often important for aquatic turtles because they facilitate migration among wetlands. Eastern Chicken Turtles (Deirochelys reticularia reticularia) are known to migrate among ponds, but little is known about western chicken turtles (D. r. miaria). Although it is tempting to presume that these subspecies are similar, molecular and ecological evidence indicate some important differences. Nevertheless, preliminary data suggest that D. r. miaria are mobile and rely on networks of wetlands; however, their migration patterns are not well-documented, and understanding their habitat requirements is critical because D. r. miaria appears to be declining throughout its range. Therefore, in 2012 we initiated a monitoring project in Oklahoma and sampled the turtle communities in a network of over 20 wetlands. Our preliminary results suggest that many turtle species are migrating, and connectivity is particularly important for D. r. miaria. We did not, however, return to those sites in 2016 or 2017, and our current observations are limited. We will return to the wetlands where D. r. miaria was previously documented, re-survey them, and record all movements that have taken place. We employ a saturation trapping strategy that results in the capture of most turtles at a site. Thus, we will be able to document most changes in location that have occurred since our last survey. The results will allow us to improve conservation recommendations by incorporating data on the movements and terrestrial corridor use of D. r. miaria and other species present in our study system. 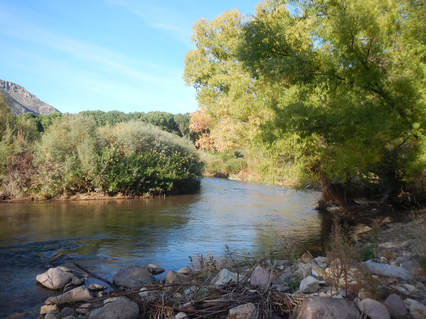 Sonora Mud Turtle Along the Gila River in New Mexico
Jonathan Duran and Tom Giermakowski
The Sonora mud turtle (Kinosternon sonoriense) is a small, cryptically colored species with a restricted range: it is found only within portions of Arizona, New Mexico and northern Mexico. It is currently listed by the IUCN as Near Threatened, and one subspecies (K. sonoriense longifemorale) has recently been placed on the federal Endangered Species List. While there have been several studies of K. sonoriense within Arizona, very little is known about its distribution within New Mexico. Recent research has focused on populations within the extreme southwestern corner of the state. There is a need to document their occurrence along the upper Gila River. Background data show that records of these turtles in New Mexico are both rare and outdated. Our project will investigate the occurrence of Sonora mud turtles within this region. We will search for turtles using a combination of baited traps and hand capture techniques. We will weigh and measure all turtles, taking a blood sample from each for molecular analyses. We will also use all observations to create a map that shows the distribution of the species within that portion of New Mexico. Information gained from this study will lay a foundation for future studies and help the conservation of Sonora mud turtles within the region. 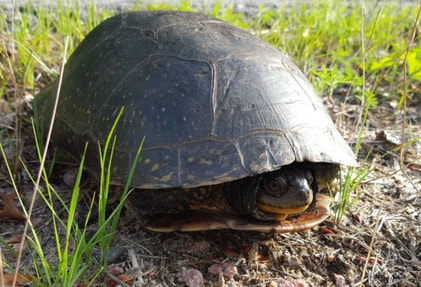 Assessing Climate Change Adaptation Potential for the Blanding's Turtle in Wisconsin Using Next-Generation Sequencing
Nathan W. Byer, Brendan N. Reid, Emily D. Fountain, and M. Zachariah Peery
Climate change is expected to impact species distributions and persistence worldwide. Turtles, with their long lifespans and delayed sexual maturity, may have a limited capacity to respond rapidly to environmental change, and assessing existing levels of adaptive genetic variation may provide important insights into the feasibility of rapid evolutionary response for sensitive turtle species. We will use landscape-genomic techniques to explore adaptive genetic variation related to climate gradients for the Blanding’s Turtle (Emydoidea blandingii) in Wisconsin. Using previously-obtained DNA samples collected throughout Wisconsin, we will identify single nucleotide polymorphisms (SNPs) using two approaches: 1), a genome-wide scan for potential adaptive genes using Genotype-by-Sequencing (GBS), and 2), targeted amplicon approach for mass sequencing of five genes related to temperature-dependent sex determination, temperature-sensing, and stress response. Targeted genes will first be amplified via polymerase chain reaction (PCR) then barcoded for identification of individuals. Samples will then be pooled and sequenced on an Illumina MiSeq. We will then relate SNPs to variation in climate, and assess the spatial distribution of each potential adaptive genetic region throughout the state to identify areas most in need of conservation and protection.